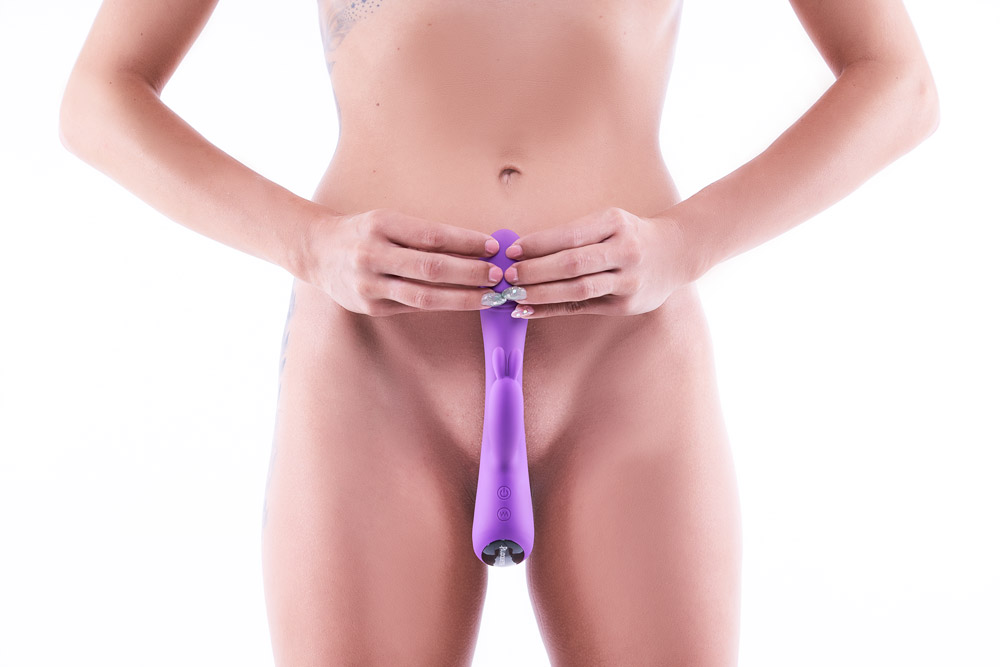 It is however a lot more flexible and curved than your average penis.  It offers real bend and flex along the shaft of the rabbit, until you get to the glans end, which is firm and rigid, housing one of the motors. This motor in the glans, feels well positioned, right at the tip, giving promise of vibrations in the right place.  The curve on that tip clearly aimed for the g-spot.

The exterior part features a motor too, albeit smaller and not located at the tip of the clit arm.  At the tip are two soft and squidgy ears, with a rounded tip to minimise the stabby feeling some rabbit give. The motor position here means the ears themselves aren't directly vibrated, but rather resonate from the motor further down in the clit arm. This clit arm also features a protrusion to stimulate the area between vaginal opening and clit.

Operating the toy is very simple, two buttons – one is an on/off switch, and the other is a mode switch. A long press turns the toy on – you can tell cos that logo on the base glows. The mode button brings you 3 constant speeds and 6 patterns of vibration.  There'll be something in there for you, don't worry!

Ok, enough description, how does it perform?

In a nutshell, it's OK.  The toy, for the price of less than $30 is amazing, but it's just not quite enough for M.  The problems are 2 fold.  Firstly, 3 constant speed settings is one short of what M would like.  The 3rd has a fair whack to it, but it's just not rumbly enough.  The internal part fairs better than the external part, the motor there does a really good job of delivering the vibrations into M's vagina. The vibrations are quite broad, so if you're into precise g-spot stimulation, this may not be what you need.  That alone though was not enough for M, since she's rather let down by the clit arm.  In an effort t make the ears less stabby (which is successfully achieved), the motor is too far away from the ears to give any kind of transfer of power into the clit, which is the second problem.

Now if you like a clit tickle rather than a clit rumble, this may well be what you are looking for, but for us just not quite there.  It's a shame really because the shape of this fits Ms body really well, the curve of the shaft seems to locate well onto the general are of her G-spot, and the 2 inch (ish) lateral distance between the clit ears and the glans tip is about right for M, its just a shame the power falls short.

Non power queens may however fair better, as it is most definitely a well made and wallet friendly toy.